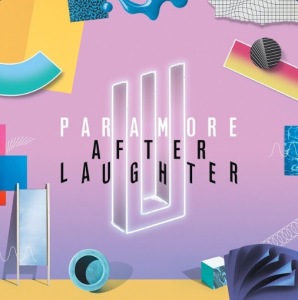 What happens After Laughter?
Paramore’s fifth studio album?
Like the rest of their music.
Art.
Poetry.
Raw.
Feels.
I loved their music as a teenager and I love them now.
Established in 2004, Paramore’s influences include punk pop and alternative and rock.
The group consists of Hayley Williams, known for her distinctive voice, drummer Zac Farro and guitarist Taylor York. All of them are songwriters.
Paramore’s past albums contain heavy instrumentation on drums, guitar and bass, pentatonic-scale melodies and angsty-lyrics.
Love, life, heartache, heartbreak.
Some numbers touch on social issues, as well.
So here’s a review of After Laughter:
(1.) Hard Times
The first track opens with light percussion. The melody is based on a  pentatonic (five-tone) scale, a songwriting technique used in a few of Paramore’s songs on past albums.
The repetition of the title, Hard Times, used in the chorus, gives this song an anthem-like quality – it acknowledges struggle – Hayley Williams connects with listeners as she shows that life’s day-to-day battles are real.
Hard times, gonna make you wonder why you even try
Hard times, gonna take you down and laugh when you cry
These lives, and I still don’t know how I even survive
Hard times, hard times
And I gotta get to rock bottom, uh
(2.) Rose-Colored Boy
In this number, decorated in a bright major key and pentatonic scale, the singer, tainted by heartache, seems to resent and lament losing optimism, yet wishes she was rose-colored, too.
Rose-colored boy
I hear you making all that noise
About the world you want to see
And oh, I’m so annoyed
‘Cause I just killed off what was left of the optimist in me
The hearts are breaking, the wars are raging on
And I have taken my glasses off
You got me nervous
I’m right at the end of my rope
A half-empty girl
Don’t make me laugh, I’ll choke
Just let me cry a little bit longer
I ain’t gon’ smile if I don’t want to
Hey man, we all can’t be like you
I wish we were all rose-colored too
My rose-colored boy
(3.) Told You So
Bass lines and drums provide the backdrop for this confident anthem. Hayley’s defiant vocals soar over the instrumentation.
The instrumentation quiets in the bridge, and Hayley sings nine times: Throw me into the fire
Throw me in, pull me out again.
Instrumentation is a feature in this song in addition to serving as support to Hayley’s singing.
(4.) Forgiveness
Mid-tempo, ballad-like feel, featuring guitar and bass.
Hayley sings about love ending in heartbreak.
The chorus is simple, using imperfect rhyme:
And you, you want forgiveness
But I, I just can’t do it yet.
The simplicity of the song’s opening theme, combined with the pure honesty of the lyrics drive this number home. Classic.
(5.) Fake Happy
Hayley sings soft about being fake happy. A bright simple chord progression opens this number. The song modulates between E Minor and G Major, (illustrating the feeling of fake happy).
The tempo increases once the chorus hits, to a driving rock rhythm and major key.
The verse switches back to the bright simple chord progression.
The song ends with the chorus in G major. Bright and (fake?) happy.
(6.) 26
Acoustic-style, an upbeat guitar ballad.
The lyrics and vocal melody give this song its epic beauty.
Hold onto hope if you got it
Don’t let it go for nobody
And they say that dreaming is free
But I wouldn’t care what it cost me.
Paramore does not write light material. Paramore writes deep. Get you right in the feels.
(7.) Pool
Piano keys open this number, mimicking rippling water. The chorus uses imagery and metaphor to describe an addiction to love.
I’m underwater
With no air in my lungs
My eyes are open
I’m done giving up
You are the wave
I could never tame
If I survive
I’ll dive back in
(8.) Grudges
Uptempo, driving alternative-rock number that encourages us all to let go of what’s happened, let go of negative feelings and move on:
Stop asking why
Why we had to waste so much time
Well, we just pick up, pick up and start again
‘Cause we can’t keep holding on to grudges.
No-nonsense, realistic and practical. Love songs that offer advice!
(9.) Caught In The Middle
Snare, bass and guitar open the song. When the chorus hits with a crescendo of full instrumentation.
(10.) Idle Worship
The song opens with a dance beat. The vocal line uses a pentatonic scale. Backup singers vocalize. The bass line descends, word painting the singer’s sentiment that she ‘hates to let you down’. E-flat major is used throughout the entire song.
(11.) No Friend
C-natural minor. The introduction is the longest on the album – background vocals come in at about 0:45 seconds into the song. The number features bass and drums and a repetitive theme.
Catchy. Gets caught in your head.
The vocals take a background throughout the song – the instrumentation overpowers the vocals.
(12.) Tell Me How
The final track on the album is an uptempo-ballad.
The verses tell the story of the singer not being their beloved’s superhuman.
The the chorus is simple and raw.
Tell me how to feel about you now
Tell me how to feel about you now
Oh, let me know
Do I suffocate or let go?
The song uses light instrumentation and ends with a pop drop.
The takeaway from After Laughter?

Paramore is not restricted to one genre. Paramore is punk. Paramore is pop. Paramore is alternative. Paramore is rock. While Paramore encompasses a range of different sounds, Paramore has signature features. Pentatonic scales. Bass lines. Drum beats. Epic vocal. And heart-wrenching, beautiful lyrics. Lighter instrumentation than past albums.

Stream After Laughter for real feels.
You won’t be disappointed.